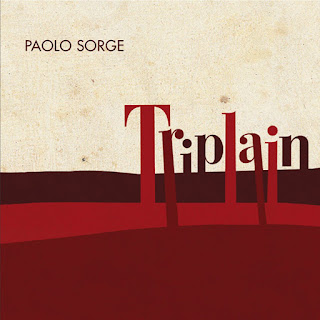 Music is a strange thing nowaday. The music business has been exploded, so there are myriads of little labels publishing more or less good music. But it's hard to find out a musician that has a vision, as some of the people I interviewed in this blog during the past years. In this period of time in which I haven't written a single word, I sometimes received some material, but most of it was retro-garde. Music that reminds of the jazz of the past, music good for dinner clubs. I also did, with my camera, the cover for the album of a jazz pianist who is releasing this album of songs, everyone with a proper singer, but it's an album that is far from the lands and the temperatures of Complete Communion, so you won't find a review here.

But this album is different. It was sent to me a couple of days ago by the label itself, and the first thing that intrigued me is that Paolo Sorge, responsible for the project and leader of the trio, played in 2006 with Butch Morris. Mr Morris is a musician I love, and I thought it was well worth a listening. And in fact, it is. Paolo Sorge is a musician born in Catania in 1968. He is both a guitarist and a composer, and his work is well known in Italy and Europe. His collaborations feature the likes of Stefano Maltese, Michel Godard, Guido Mazzon, Butch Morris, Ab Baars, Keith Tippett, Don Byron, Elliott Sharp and many others. In 2004 he founded with drummer Francesco Cusa the label Improvvisatore Involontario, that is also the base for an artistic movement who provides the world of improvised music with many interesting artists.

The trio featured in the album Triplain is completed by bassist Gabriele Evangelista and drummer Francesco Cusa. Gabriele, after graduating, played with orchestras and chamber groups doing classical music. After that period he discovered improvisation and studied with Scott Colley and Salvatore Bonafede. Since 2010 he is part of the Enrico Rava quintet known as Enrico Rava Tribe. Cusa, co-founder of the Bassesfere collective, is very active in the field of music for films, theatre dance and visual arts. He collaborates with many bands and groups, leaving a deep trace in the world of improvised music during this period. So, if you think that this trio is made up of three personalities, two more avant-oriented, and one more classically-trained, you can have, even without a single listening, an idea of the music you will find in this record.

Triplain is a record made of vibrant sounds and nice textures. It passes from the irony of Divergenze, the opening track, to the volatile quality surrounding the solid groove of Ciclosfera, where the atmosphere is more dense. In the middle, you have more whispered pieces like Floating, or Idea 2 where drums, not bass, are responsible for the groove, the nice guitar climaxes of Slonimskys Domino, the syncopations of Triplain, the melancholy barely hidden through the textures of TreDueNove.


How can we call this music? For sure as 'post-avantgarde', since the musicians involved put their own styles together in order to obtain a sound that is carrying with it different experiences all grown in our countries since the affirmation of improvised music as an European language. His limits is that it talks to itself and to the history of European improvised music nowadays, in a period of nostalgia – but I would say 'riflusso' in my own native language, that is slightly different – in which no one is crying or screaming, and everybody obeys. Can music be part of the oppression or it has to be part of the revolt? But this record, anyway, is worth a listening.