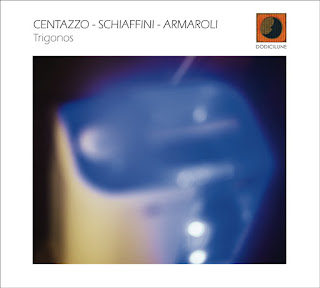 Andrea Centazzo, composer and performer, is one of the pivotal figures in the so-called NY Downtown Music Scene of the 1970's. Unluckily he is known here in Italy only as 'Giorgio Gaslini drummer' – he played drums and percussions with Gaslini from 1972 to 1976 – and this fact limited his career at a point that Centazzo chose to move to the Us at the end of the decade. There, he played with John Zorn, Tom Cora, Eugene Chadbourne and Toshinori Kondo.

He also founded his own label, Ictus, and recorded with Steve Lacy, Evan Parker, Pierre Favre, Alvin Curran among the others. At the same time he studied composition. A more complex figure than the 'percussionist' described by the press, Andrea Centazzo has now recorded for the label Dodicilune a new album of his own compositions, with the help of vibraphonist Sergio Armaroli and trombonist Giancarlo Schiaffini. If you want to know more about this couple of musicians, read here. 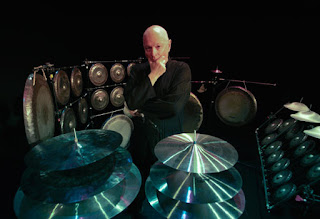 The music provided by this album is 10 compositions, four by Centazzo and Armaroli, two by Centazzo/Schiaffini, and the remaining played by the trio. Being at the border of contemporary music and improvised music, all the compositions have a meditative quality that goes beyond the sum of its parts.

The gestures have a quality typical of the Eastern folk music, but they are not rooted in it: it is more an assonance than a derivation. Listening to the record, I often asked myself how good would it be to listen to this music live in a good theatre, since it's aura would be better exploited in this context.

And in effect, the issue of the record was premièred in Milan, Italy, at the Out Off, a small theatre devoted to theatrical experimentation since the 1970's. Really a good place to start this new adventure for an artist like Centazzo, who in the past has gone well beyond music also thanks to his painted graphic scores.